Mixed wrestling is something that I read about and found quite intriguing. I recognized this would be a bit different than the playful wrestling with my old girlfriend. I was in Las Vegas and read a post for Goddess Kara who was touring there. Kara is a former dancer turned dom. She is in great shape and began studying Judo several years ago. I contacted her via email and we agreed on a semi-competitive mixed wrestling session.

At her room, there stood a gorgeous blonde decked out in a black leather corset and boots. Kara is about 5’4” and thin but certainly toned. I asked, “Are you going to be able to wrestle in that”? Kara laughed and said, “Oh you’ll find out alright”. We chatted a bit and finally she asked if I was ready. I stripped down to my shorts and said, “You bet”.

Kara had a mat laid out and we stood facing each other. With the blink of an eye, Kara rushed me and locked arm around my neck and grabbed wrist with her other. Before I knew what was happening, Kara placed one of her legs behind mine and tripped me to the floor. I started to get up but Kara got her legs around my waist. She braced herself on her hands and poured on the pressure. I struggled and tried to twist out but her legs 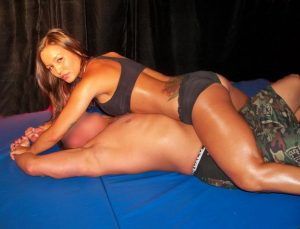 were like steel ropes. Suddenly Kara let go with her legs but she grabbed my arm and forced me down to the mat on face down. She still had complete control of my arm and placed her weight on my upper back while holding my arm sideways and up. Kara said, “This is armpit arm lock, I’d tell you the proper name but you wouldn’t comprehend it”. I told her, “Sure I would”. Kara then poured on more pressure and then said, “I think you understand now!” I yelled, “oh yes I do! I give!” Kara laughed, let go and stood up.

I got up and Kara was smiling, obviously enjoying having just bested me. I am bigger than her by about 40 lbs and am quite fit. I thought her quick victory over me was because I was surprised by her technique. I figured it might be a bit more competitive now that I have some idea of what to expect. Kara asked, “Well are you ready?” I said I was and we began circling each other.

Kara lunged out at me and locked up my left arm. I tried to pull it backwards but she then got in close with her back to me, gripped her other arm around me neck and flipped me over her hip. I landed on my back. Before I knew it, Kara crashed landed on top of me with her cute butt coming down hard on my stomach. It did knock the wind out of me a bit. I grabbed her arms and tried to twist sideways to throw her off. Instead, she managed to get her arms around mine and bear them down to the floor. I was in quite a predicament.

I tried to buck her off me, twist sideways and get my arms free. It was just not working. Her leverage and the lock she had on my arms were making the hold inescapable. Finally I stopped moving. Kara told me, “because you are so curious, this is Osaewaza, my favorite pinning technique, do you like it?” I muffled out, “sure”. With that, Kara released the lock and pinned my arms down with her knees and sat upright on top of me with hands placed on her hips. I tried to buck off when she did this but it did not work. This seemed to amuse Kara who bounced her butt on my stomach causing her weight to crash land on me. I yelled, “OK! You win”.

Kara asked, “what if I decided to just sit here all day long bouncing on top of you? I could you know”. I agreed and this made Kara giggle. She clearly enjoys prevailing over someone in a mixed wrestling match. While continuing to sit on top of me, Kara regaled me with stories of how she has gotten many people in this same predicament. She told me it is her favorite hold as she can look down at the face of her beaten victim.

This is pretty much how our mixed wrestling session went. We’d lock up, I would be taken down and then find myself in either a leg lock, arm lock or pin that I couldn’t get out of. While it was intended to be a semi-competitive session, it was totally one sided. I once managed to get on top of Kara but she quickly reversed it. The responding hold was particularly strong after that.

All in all, I greatly enjoyed my mixed wrestling session with Kara.